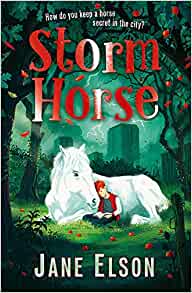 I am delighted to be taking part in the Storm Horse Blog Tour for Dyslexia Awareness Week.

Part A:  A review of Storm Horse by Melissa Jordan

The main character is a boy called Daniel Margate who lives on the Beckham Estate. You immediately know this story features characters often not portrayed in children’s books.

You learn that Daniel went to the food bank two months earlier with his mum, that he finds it difficult to find any quiet space in his flat and that he is Dyslexic. I love how it shares through the story how Daniel is supported to find out more about his Dyslexia and encouraged to think of it as ‘being different but good’.

I haven’t even mentioned the horses, two feature in the story one historical and one modern day.

When Daniel needs to escape he goes to a shed near the Animal Rescue Centre where his mum works. There he reads his great-great-grandfathers scrapbook, which contains letters he wrote to the legendary Seabiscuit, the race horse that was too short and had knobbly knees, but who despite the odds won races, giving hope to millions of American’s devastated by the American Great Depression.

The second horse is Jamie Dodger, which Daniel names after his favourite biscuit. When one stormy night a horse turns up at the shed.

In an unlucky twist of fate Daniel some how manages to be entered into a national reading contest and a running race on the same day, when he isn’t much good at either.

But, when a band of misfits, 4 boys and one girls group together to form the ‘Secret Horse Society’ and make a pact to keep him Jamie Dodger (the storm horse) secret until the day of the contest to and look him their lives open up in many ways.

Part B: “World Beyond the Book:  Opening the up the world of Rescue Animals to Young People. ” by Jane Elson

Find out about author Jane Elson’s passion for animals that influenced her books Storm Horse and Moon Dog.

What shaped her writing of ‘gritty middle grade realism’ In her blog post below  which I am sharing as part of the storm horse blog tour.

that challenge is what excites me.

Some children want to jump into the pages of a book when they finish it and stay there. I was one of those children and as an author of gritty middle grade realism it’s very important that I am responsible in the world that I offer children, after they have finished the last page. For example, Will You Catch Me? is about Nell Hobbs, the child of an alcoholic, so at the back of the book I’ve included the details of charity Nacoa (The National Association for Children of Alcoholics nacoa.org.uk) so that if a reader thinks, ’This is my world, this is happening to me,’  they have somewhere to go. I am now a proud ambassador for Nacoa.

Storm Horse and my previous book Moon Dog are both partly set around the Beckham Animal Rescue Centre. My hope is that children who read these books will become rescue-animal minded, and want to love and care for the creatures around them.

The Beckham Animal Rescue Centre is fictitious but as an advocate for the rescue charity All Dogs Matter, it is really important to me that the way it exists on the page is bound by realism. I don’t offer a world where children charge into rescue centres, wandering around by themselves, taking over and independently rescuing animals willy nilly in an unrealistic way.

I know that All Dogs Matter get many phone calls from parents asking if their children can volunteer in their centre. To volunteer at ADM you have to be 18 and over, so it’s really important that I don’t show children working in rescue centres in my books. However, my books do show them how they can be rescue animal minded as young people.

My extraordinary within the ordinary in Storm Horse is that the children find a horse and keep him secret, but again I spent hours justifying how it could be possible, and constructing a scenario where Daniel would have access to the resources in order to do this.

It’s really important when writing realism that I keep an eye on the world around me. My books have happened to overlap with topical issues  again and again. Moon Dog raises awareness about cruel puppy farms where puppies are bred on a mass scale with little thought for the animals’ welfare, often kept in terrible conditions resulting in disease and heartbreak. I had no inkling whilst writing Moon Dog that the pandemic was about to happen, and that the demand for buying puppies would fly up. Everybody decided they wanted a dog and puppies have been sold for ridiculous prices on the Internet by dodgy puppy farmers and backstreet breeders. To make matters worse, when people realise they’ve made a mistake and no longer want their puppy, rather than doing the responsible thing and taking it to a rescue centre they are reselling the poor little thing online to get some of their money back. The result is a population of puppies with separation anxiety.

Whilst writing Storm Horse and Moon Dog, I was in full consultation with Ira Moss, the general manager of All Dogs Matter throughout. I could not have written the books without her. She checked all the rescue centre content for me and gave me very useful notes resulting in several parts being rewritten. For example, at no time was Daniel ever wandering around the Beckham Animal Rescue Centre on his own as this is not allowed and any interaction he had with animals was done responsibly – even though the children were keeping a secret horse!

All Dogs Matter are such a creative charity and run lots of fun competitions, so if you do have an animal-loving youngster in your life or indeed if you yourself feel like entering, do checkout their website. They have a wonderful scheme called Mini Paws with lots of fun ideas for young people to get involved in fundraising. Here is the link: https://alldogsmatter.co.uk/team-mini-paws/

I’m often invited to judge their competitions and am counting the days until live events can happen again as they are always an important part of my calendar.

Find out more about All Dogs Matter here.

You can buy Storm Horse by Jane Elson as one of the choices in my 4 for £24 Chapter book bundle below.

Can also be added to Bespoke book bundles at www.readersthatcare.co.uk