Freddie’s Impossible Dream is based on a true story of the author Nigel Lungenmuss-Ward life,  who overcome many obstacles to realise his dream of being in a band. Robbie who is now aged 9 years,  illustrated the story. As my stop on the blog tour I wanted to find out how farther and son worked together to produce the book, and in particular how they collaborated to decided on the pictures for the story. I discovered how the inspiration for Crabby the crab came about and that Freddie Mercury’s life helped give Nigel the confidence to ask to join a band.

1. Having decided to write and illustrate a book together, how did you decide to break up the story into pages that could be illustrated?

Initially, I wrote the story down in a notebook with some basic notes about what I imagined the illustrations might look like. I also showed Robbie some pictures that I took at the First Light Festival, as he did not attend this event. Secondly, I wrote the story in a sketch pad, placing the text where I wanted it on the page. Robbie then got to work on drawing the images. To start with, Robbie and I conflicted with what the pages should look like. His vision and mine didn’t really align.

However, I realised that I was killing his creativity for the project. So, I made the decision to let him complete the first draft before I saw any of the images. I am so glad that I made that decision and he really took off with the project and I think he did an outstanding job with them. 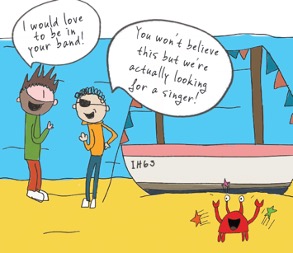 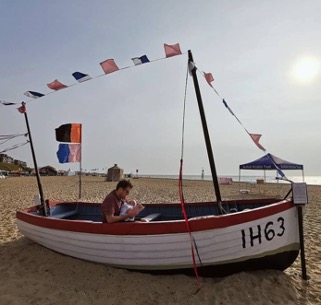 2.  Where did the inspiration for the story come from?

The story is autobiographical. Freddie is me. It is the story about how I joined a band called The Rogue Shanty Buoys. We sing sea shanty songs. Our website is www.shanties.co.uk

I called the story Freddie’s Impossible Dream because the night before I went to the festival, and saw the band perform, I watched the Bohemian Rhapsody, about Freddie Mercury. The film inspired me so when I saw Stephen (The lead singer of the band) on the beach I decided to be brave and ask about joining the band. Maybe, if I hadn’t watched the film I wouldn’t be in the band and the book wouldn’t exist.

I asked Robbie (The IllustraTor):

3. I Notice  a crab keeps appearing in the story.  How did the idea of the crab come about?

The crab character in the story (Crabby) is my creation. Dad did not have a crab in the story at all to start with. Our publisher asked us to draw a back cover, as we hadn’t done one already. After completing it, dad said to me that it is a little bare and we need to add something else in. This is when I drew Crabby. Then I had lots of ideas of how we should add Crabby in other parts of the story too. I thought it would be funny if Crabby liked ice-cream and that he could skydive. Whenever I tell anyone about Crabby they always laugh, so I think people will like him. 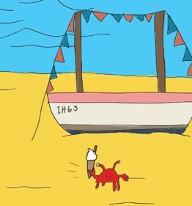 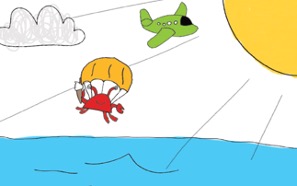 4. What materials, techniques and/or tools did you use to draw the pictures?

I use a pencil – HB and a normal rubber. I just love drawing and I do a lot of it. I have filled up all my sketch books and I keep having to ask Farther Christmas for more. Sometimes I use fine liner pens to draw around the outline of the picture I am drawing.

5. What are your Top Tips for other children that might help them to illustrate a story?

You can pre-order a copy of the book. Straight from the publishers Grace Wright publishing, here.