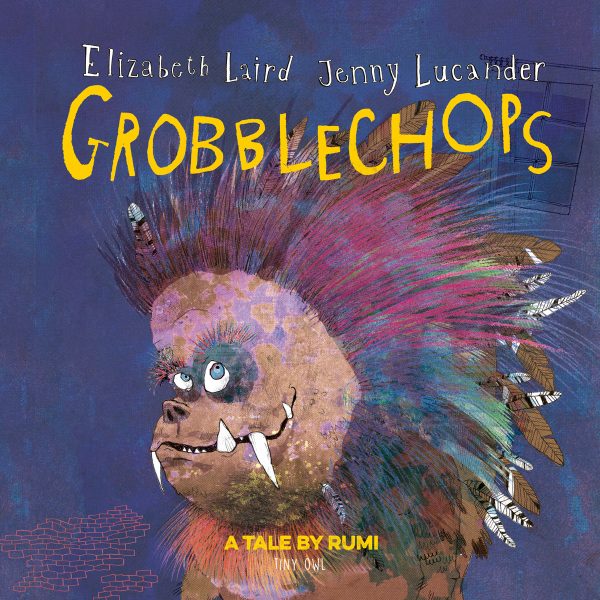 Is a retelling of a poem by Rumi, a renowned poet and philosopher who lived in ancient Persia. This is one of several of his poems which have been translated by the publishers Tiny Owl, and brought to life in engaging and thoughtful picture books for a new generation.  I love all the retellings, but this is my favourite so far. On one level it is a story of a boy, called Amir, who is scared to go to bed, because of the monsters underneath it.  The boy’s dad gently encourages him to make friends with the monster, so he won’t be scared anymore. But, there is so much more to this story, there are other important messages that are being conveyed.

In the story the boy and his dad discover that fighting monsters doesn’t get them anywhere.  The dad encourages the monster to go off and play and says:

“when the grown-ups see how nicely you and little monster are playing, we’ll stop arguing and sit down for a cup of coffee to talk things over.”

The original pictures by Jenny Lucander beautifully capture the dialogue between the boy and his dad. They include many scenes children recognise. Whilst at the same time there is a distinctive ‘other world’ fell to the illustrations.  In her artwork Jenny has managed to create a unique monster which is both lovable and scary. A truly special and unique bet-time story, which will help children deal with their night-time fears. It might also help children deal with their anxiety over making new friends.  It also has universal messages about acknowledging and making friends with your fears, and that fighting what you are afraid off is rarely the answer. This will resonate with children of all ages and adults.

Then you to Tiny Owl for sending me a review copy of this book. How we interact with the world around us has always been something which has interested me. Political events in Britain in 2016 and their aftermath have made me realise not everyone understands the migrant or immigrant experience and that children’s books can have an important role in building global empathy and understanding. Featured below are 5 books that can help children and adults explore these issues. Each is written from a child’s perspective. The stories deal with complex issues, and are not afraid to deal with traumatic and difficult situation’s, but in a sensitive way that the very best of children’s authors know how to do. Despite the sometimes difficulties circumstances the children and their families face they provide hope of the ability for children to survive, and the capacity for humans to adapt and change, such a vital message. This selection of children’s books to help build global empathy and understanding about refugees experiences and other ways we are all connected include: a picture book, a story written in prose and chapter books at different reading levels. They are all shorter stories, proving that stories that really make you think don’t have to be long ones!