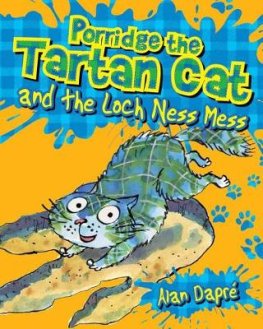 The Loch Ness Mess is book 4 in the Alan Dapre’s fantastic series about Porridge the Tartan cat. We love the character of Porridge and the funny madcap stories that involve plenty of mishaps and adventures really appeal to my nearly 7 year old son. We also love the rich vocabulary and language which is used through out the series and which really sets this book apart from many early readers.

Porridge is a cat who fell into a pot of Tartan paint as a kitten. The story is set in Scotland, Porridge lives with the McFunn family, the twins Ross and Isla, mum, dad and ‘gadget grandad’ and ‘groovy gran’. In the stories Porridge end’s up going on unexpected, ‘wacky’ an crazy adventures, which usually involve dealing with the chaos created by Fergus McFungus or Windy Wendy.

In the Loch Ness Mess, the McFunn family go on a fossil hunting holiday by the shores of Loch Ness. My son is fascinated by fossils and rocks so this definitely helped to hook him into the story. Not that he needed much encouragement as he already loved the character of Porridge! (from reading book one a few months earlier). The story gets off to an exciting start when Dad wishes he was a dinosaur and unexpectedly turns into one! So then all sorts of chaos ensues and Fergus McFungus want’s to capture dad. When Porridge falls into the loch he is rescued by Nessie ! To find out how Porridge, Isla and Ross get reunited, and if they can rescue their Dad and turn him back into a human you will have to read the book. This story is sure to appeal to children that like dinosaurs and monsters, but also kids that like neither and love a fun family adventure.

Along with great characters and original wacky and fun storylines, there are three more things make the Porridge stories special.

Firstly, are the great black and white pictures by Yuliya Somina really capture the story and characters and bring it to life. These included pictures of Porridge with different expressions interspersed with the text and full page action scenes.

Secondly, the rich vocabulary and language set’s this book apart from many other early readers. There are also some great Scottish phrases too, although less in Loch Ness than the first book. When my son shared reading the first book: “Porridge the Tartan and the Brawsome Bagpies” last summer we were surprised to discover that he wasn’t put off by words he didn’t know. In fact far from it he actually enjoyed the challenge.

Thirdly, at the back of the book is a spot the difference activity and some jokes. Whilst interspersed in the text are lots of Me-words. The author @AlanDapre explained in reply to my twitter post that this was a play on Meow, and that he thought it would be fun to see how many other Me words he could create. Here are a few examples:

My son loves these. They help to break up the text up, provide an opportunity for expression and add to the humour. I think they also help the reader to understand what Porridge is feeling particular moments in the story.

The Porridge stories will always have a special place in our heart. Because last June the first Porridge book showed my son and us what he was capable of reading. We shared reading the first two books in the series (he read a chapter and we read a couple of chapters) at the time the text level of these books was considerably above the rest of what he was reading. My son loves cats so that was a great hook to start with, but what kept his interest in the way that Alan Dapre writes and the pictures of Yuliya Somina which capture the story so well. It has been fascinating to see my son return the Porridge series five months after we read the first book, and to see just how far he has come in his reading journey in that time. This time he comfortably read ten chapters aloud straight off in one go, and indication that he has improved his stamina in this time, but also that these are stories that he wants to read.

Thank you to Floris Books for a copy of the book which I won on a Twitter competition @FlorisBooks.