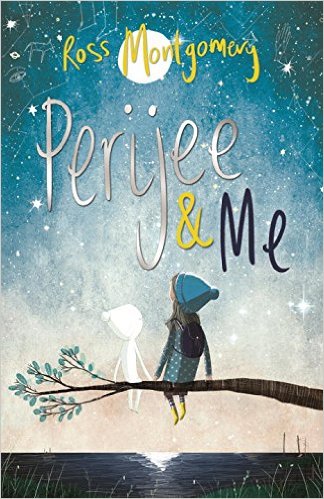 Here is my blog’s first book review: Perijee and Me by Ross Montgomery.

A funny, heartwarming and thoughtful story, which I could not put down. Catlin is not looking forward to the lonely summer holidays or her parents finding out how she is really doing at school. She has dyslexia and has recently moved to an island that only her and her parents live on. Her loneliness and vulnerabilities are sensitively portrayed, and counterbalanced by her belief in kindness and a sense of hope.

One stormy night a ‘blob’ is washed up onto the beach. This alien creature takes on many forms, including at one point, mimicking Catlin’s very own bobble hat and yellow wellies. She befriend’s the alien and treats it rather like the baby brother she doesn’t have, showing it around the island and helping it to learn, including how to read a book (a clever twist).

When the alien, which she calls Perijee, gets scared, he goes on the rampage across Britain. Caitlin sets of after him to try and rescue him and get others to understand that he really isn’t a monster and that he is “kind and gentle”. She meet’s new people on the way. To discover who turns out to be friend or foe and if she succeeds in saving him you will have to read it!

The main narrative of the story is about Catlin and her relationship with others. But, you still get a strong sense of the landscape in which it is set and her sense of awe at it too, which is beautiful conveyed. At the beginning of the books she is on the island:

“If you opened your eyes wide enough you could see all the stars looking down on us like a city in the sky.”

And later when they travelled up river on a boat towards the Thames:

“…now a maze of chimney’s and skyscrapers jutted out of the water ahead of us, each one….It was beautiful.”

I like the fact that just when you think you know what is happening in the story there are some clever twists in the tale.

It is a story, which can be interpreted on many levels. It is about self-discovery friendship, the power of kindness and ultimately finding what you need. It also deals with the consequences of parents ignoring their children and not listening, making this a great book for adult’s as well as children! Thirdly, there are some much wider society messages, which could prompt some interesting discussions on for example exploring where fear comes from and how individuals and communities respond to both fear and the unknown. A great read, that you will want to share and read more than once.

Thanks to @KidLitReaders twitter group for introducing me to this great book and our fab discussion we had about it.