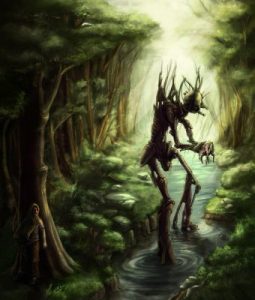 A teacher in the fabulous bookish twitter community I am part off, recently posted this question:

“We are using this picture as a writing stimulus. Y6 children thinking hard about the effect of the reader. Looking for extracts from books of strange, unfamiliar creatures (harmless or dangerous) and/or forest descriptions (again peaceful or scary)”

All three extracts feature trees or a tree, and some great suspense writing . In Celine Kieran”s Wild trilogy, MUP is on here way back home from visiting her sick Aunt; as she drifts in and out of sleep in the car she sees through the window witches in the trees.  In Kathleen Fidler’s the Boy with a Bronze Axe, they are not sure what’s lurking in the water in a cave they’re exploring. later they discover it is a tree trunk!  Finally in Barbara Henderson’s Punch a young boy is running away from a fire and climbs up a pine tree, but then something starts to climb up after him.

“outside the night was streaming past, Mup had slumped against the door with her face tilted to the sky, and she was looking up through the branches of the roadside trees, the trees were falling away as the car sped by, and there were witches in the branches and they were following the car.

Mup wasn’t startled – half asleep as she was, with the taste of warm custard in her mouth – but she frowned up aT the witches with an inkling that something wasn’t right……….….Mup was filled with the knowledge that she was awake, and there were witches in the trees, following the car.

There were men witches and women witches, and they leapt from branch to branch, racing along at tremendous speed. They were nothing but shadows among shadows, so that Mup had to strain her eyes to see them……….Then one of the witches jumped the gap between the two trunks, her silhouette dark against the fine grey of the sky. She descended in a falling arc, her clothes blown back like ragged black wings. As her pale hands reached for the branches of the next tree, she looked down into……”

It was Brockan who first saw the strange thing in the water below the ledge. “Oh look! What’s that?” he cried in terror, clutching at Tenko. “What’s that dark thing, waving terrible arms? Is it the spirit of the cave come to snatch us?”

He turned to run and would have fallen into the water below if Tenko had not grabbed him. Tenko’s heart had leaped and thudded for a second, but he saw the object did not move any nearer to them. All at once he knew what is was.

“Stay here!” he said to the other two. “I am going to have a closer look.”

……………Tenko crouched down, crawling nearer and nearer to it as he would creep up on an enemy. One of its arms was outstretched towards him. Suddenly Tenko dealt it a blow with his axe. There was splintering sound but the arm did not move. Tenko stood up and gave a cry of joy.

“Come here! Come here!” He shouted. ” It is what I thought.” Kali and Brockan came slowly timidly, not quite sure of their safety.

“What is it Tenko?” Kali whispered, Even her low voice echoed mysteriously round the cave.

P69 The Boy with the Bronze Axe, Kathleen Fidler.

A young boy called Phineas is running away from a his boss, after he accidentally started a fire.

“ A sob rips through my lungs and my vision blurs, a mix of smoke and despair; until more flutterings and rustlings disturb me and the trunk sways alarmingly. I hold my breath. There is no mistaking it.

Someone is climbing my tree.

I cling to the trunk as tight as I can and I peer down, and my blood freezes.

Through the dense needle branches. I recognise the subtle stripes of a prisoners clothes.” Some ginormous and rather unusual spiders:

In the Christmas holidays I read Dan Smith’s Below Zero. Which features some brilliant robotic spiders that get rather out of control, but to find out the reasons why they do you will have to read the book!  Then my son suggested I include the giant spider in Larklight.

“At the back of the room there were three large bays………Right now HAL and ROY were empty, but the bay with ED above it was home to something that was one of the most amazing things Zak had ever seen. But, also one of the scariest.

The Spider were slightly bigger than a two-seater Smart car, and was made of a flat oval casing, about a metre and a half deep that housed the robot’s ‘brain’. On top of that, the bulk of the body was a ribbed dome, like a bloated tick that had filled itself with too much blood. It had four legs, each joined in six places, giving it a look of a weird grey metal spider. Close to the front, it had four narrow arms designed to accept interchangeable attachments. For now the arms were tipped with pincers.” “Down in the hall, the monstrous spider squeezed it’s prickly ball of a body in through the door with a faint scraping sound. A cluster of black eyes glittered like wet grapes at the front end. Above them a shabby brown bowler hat was perched upon it’s spines. Beneath, hairy mouth-parts twitched and fidgeted. It tilted itself upwards, and saw me starring down at it.

P27-p28  Larklight by Philip Reeve and illustrated by David Wyatt

Think about what sort of spider you would create. What size would it be? Is it a friendly spider or a monster?

Can you draw what Dan Smiths robot spider looked like? What features of your own might you add?

What other stories do you know that feature a spider or spiders? And finally but by no means least is my son’s favourite creature from Cakes in Space, written by Phillip Reeve and illustrated by Sarah McIntyre. Astra IS in a spaceship, with her family, which is travelling from earth to the planet Nova Mundi in deep space. They were all put to sleep in little sleeping pods. But, astra wakes up whilst everyone else is sleeping. she has already dealt with some rather unsual cake monsters.

“ It was a monster alright, but a different sort of montster: a squat plump one in a grease-stained spacesuit like a grubby chimney pot, with a nest of eyes on stalks poking out of it’s helmet.“

“I am sorry said Astra. I don’t understand.”