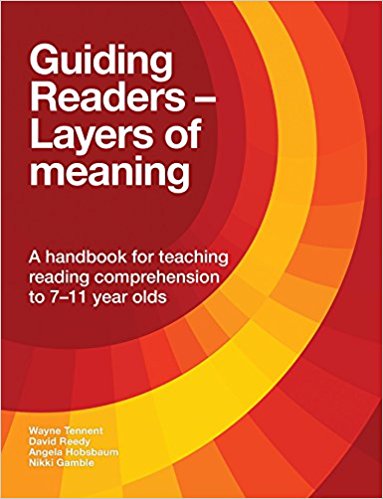 I love reading a book which strongly resonates with me.  This one I picked up at just the right moment. I have my fabulous ‘bookish’ friends on Twitter to thank for recommending it, and for continuing to remind me it existed so I remembered to pick it up.  As it happened I had just bought a copy when a Twitter friend of mine posted up a comment and particular page from the book which really got me thinking.

Described as a ‘handbook for teaching reading comprehension to 7 to 11 year olds’, this book is so much more and could be used in a number of ways.  I would highly recommend it to anyone including parents (with some knowledge of the reading process) who want to help a child build their reading skills and help them become a reader who wants to read.  So much in this book confirms everything I have learnt in the last few years about reading and reading for pleasure.  However, there were things that challenged my perception too.  It is a very readable book. There was some unfamiliar language but the clear way it is written and the many illustrative examples really helped me to take on what it was saying.  I am now going to talk about some of the things that really meant something to me from this book.

The first thing that struck me was a reminder of the complexity of the multiple processes which occur when a fluent reader is reading, that allows one to attach meaning to and make sense of a text. It was really helpful to be reminded that as fluent readers we may be unware of what is going on in our heads as we read and reflect on the book. When reading a text, less experienced readers are more likely to be ‘interrupted’ as they use their developing reader skills to make sense of what they are reading. This is something that could affect all readers at different points on their reading journeys. One of the things I have noticed with my own children and some other children is that if a child find’s a text they really connect with it can increase their motivation to overcome these difficulties.

The second thing I noticed was the detail it goes into about the processes that are going on in our brains, to help us understand and make sense of a new text. I am not going to go into the detail here. But, there were two concepts that really stood out. These were: ‘reading in the moment’ and ‘reading reflection’. Reading in the moment, is what sense the reader makes of the text as they initially read it, this builds up a literal understanding of the text by dealing with a surface layer of meaning. Reading reflection involves the reader engaging with deeper layers of meaning in the text. It can also mostly only be done by re-reading the text and/or reflecting on part of it or by looking for clues to support your viewpoint. I found this quote really helpful:

“When readers reflect on their reading, they process the text in a slightly different way from reading in the moment, because they have time to consider their understanding.” (1)

I did not however start this book at the beginning I jumped straight in to a later section where an example is given of a group of children being asked to compare two books and say which they preferred and to justify their answer. An example of reflective reading in practice.  This got my attention as it seemed a really great idea. I had already heard of comparing non-fiction and fiction texts to enhance understanding of both before, but not the comparison of two fiction texts as a means of developing ‘readers reflection’ skills. Seems somewhat obvious when you stop to think about it! The other key point in this example that strongly resonated was the need for ‘authenticity’ in the questions that the teacher or facilitator (which could be a parent when home reading) asks. In this example of two picture books being compared the teacher asks:

“..please tell us which story your preferred and why?” (1)

In this example the question is ‘authentic’ because the asker doesn’t know which book the children will prefer, and there is also no right or wrong answer. The whole book emphasis’s that encouraging children to reflect on what they read is not about asking them a set of questions to which the teacher already knows the answer. But, in asking them what I would call ‘open questions’ in which there is not one correct answer, but many depending on your viewpoint. That doesn’t mean that some times there isn’t a need for other sorts of questions for example, clarifying ones to check if a child has understood the correct meaning of a word.  Given everything I have learnt in the last few years this is something I should have been clear on.  However, I have to admit to being very muddles in this respect recently in the way I have been trying to support both my children with their home reading. I now feel slightly better because I now understand why my bright, imaginative, and highly individual children have shown a reluctance to answer the questions that I have been asking them!

Applying some of what I had learnt about asking questions to help children develop their ‘reading reflection’ skills  I tried something different with my son. He has recently finished reading the 6 book Gold set of the Project X Alien Adventures Series 1 (2). One of the questions I asked was: “Who were the badies?” A question I genuinely did not know the answer to. Which is another point the book makes about co-constructing meaning together. So he told me about some of the badies and then we went through the books together looking for the others and finding in which stories they appeared. Then we started another conversation (prompted by a few of the picture) about how the book used both pictures and language to convey the threat of the arriving baddy or baddies. These included clarifying a few words he was not sure of.  He also has an information book about the series. So we looked at the two sidekicks that help the four characters that are the heros and heroines of Project X Aliens Adventures. And we looked at qualities that Seven and Nok had. I then asked: “How have Nok and Seven used their qualities to help defeat the Badies?” He came up with a couple of examples. The conversations we had and the enthusiasm he showed whilst doing it was incomparable to anything I had done with him previously. If you haven’t read this book yet read it!

It  is not just a series for boys or reluctant readers. My daughter said that had this been available at her school when she was the same age she would have loved to read it too. Whilst the books can be read in any order. There is a 6 book set for each reading band  and if your child reads them (or re-reads them) in order there are more opportunities for building their ‘reflecting reading’ skills. Especially if you have the opportunity to return to them at a later date, which we did because I had bought him a set on his request.