Adapted by Richmond Clements and illustrated by Inko

Having Scottish connections and being a fan of manga art I jumped at the chance to join a blog tour for a graphic novel adaption of the famous poem Tam O’Shanter by Robert Burns which has recently been published by Cranachan publishing.

Who was Robert Burns?

Robert Burns is Scotland’s National bard (poet). His poetry and songs are famous across the world. He was born on the 25th January 1759 in Alloway, Ayshire in Scotland. There are links in the back of the graphic novel to the National Trust for Scotland website where you can find out lots of great information. Tam O’Shanter is one of Robert Burns most famous poems, partly because it is set in the village of Alloway where he spent his early childhood. The poem was first published in March 1791 in the Edinburgh Herald and Edinburgh magazine.

What is Tam O’Shanter About? 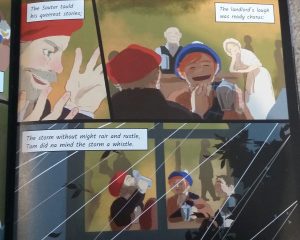 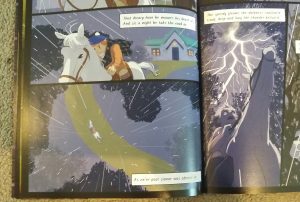 The Tam O’Shanter is a narrative story told as a poem. It is written in both Scots and English, and makes use of the linguistic qualities of each language to build the narrative and create the mood. The Scots does make it a more challenging read. However, once  I had an understanding of the basic premise and narrative structure of the poem I found Inko’s illustrations really helped to to bring it alive.

The story of Tam O’Shanter is structured around a journey or quest. It features Tarn who after a day drinking in an Inn rides his horse, called Meg through a storm and the village of Alloway to return to his home. It’s useful to remember this was set in 1759 so there were no cars or buses, so the only way to get home on a wild night was on horseback!  After leaving the cosy Inn, a slightly drunk Tarn sets out into the storm. On the journey he tries to keep up his moral by singing old Scotts songs. Eventually he comes across a scene in the ruined church of Alloway Auld Kirk. Where witches and warlocks are having a party. Unseen he gets more and more interested in watching the ‘winsome wench’ dance and her short skirt, which in old Scots is ‘cutty sark’. He is then chased by this ‘hellish legion’ of spirits and creatures over the Brig O Doon, which is a bridge that still exists today. Legend has it that evil spirts can not cross water. When Tarn is almost home his faithful horse Meg loses her tail to the witch. Finally, he arrives safely home.

The Manga illustrations by Inko

Being a relative newcomer to Robert Burns poem the Tam O’Shanter I found the National Trust for Scotland website really helpful. Inko is a UK based Japanese manga artist. Combining a famous classic poem with modern manga artwork was an ingenious idea by publishers Cranchan publishing. In Inko’s illustrations the colours used provide a great contrast between the warm cosy pub, and the dark story night.

Two important Scottish places that feature in the poem

The 16th century church was already a ruin when Robert Burns was born. You can visit the ruins of the church and the graveyard today. 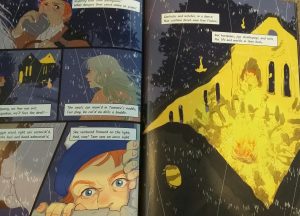 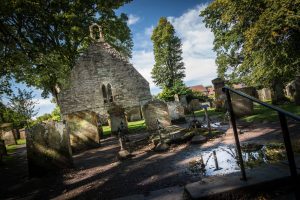 Is the original 15th century cobblestone bridge which crosses the River Doon. You can still visit and stand on it today. 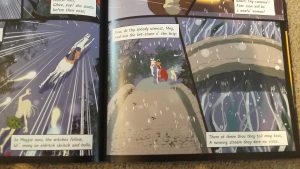 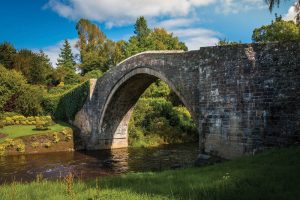 I would highly recommend this for children aged 10+ years, and it would be of considerable interest to adults too. But, teachers who are interested in using this with 10-12 year olds, would need to look closely at the witch and wench scenes to decide it was appropriate for their class.

Support a bookshop near you and buy this graphic novel through Hive.

Phtographs of Brig O’Doon and Alloway Auld Kirk today were taken from the National Trust for Scotland website.

This is a really useful article: