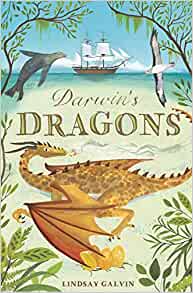 I loved reading Darwin’s Dragon, one of my most anticipated books of the year which has finally arrived. My daughters a big fan of Lindsay Galvin’s the Secret of the Deep, so I was expecting great things. It didn’t disappoint.

The story begins in 1835. It’s about what could have happened during one of Darwin’s expeditions to the Galapagos Islands.  It is written from the perspective of Syms Covington. Who first joined Darwins ship the Beagle, as a cabin boy and a fiddler. He then worked his way up to become Darwin’s assistant. With short chapters, and plenty of nail-biting action there is lot’s to draw readers in.

The story is a most intriguing and unique combination of historical fiction, weird and wonderful detail on the animals and habitats of the Galapagos, and fantasy (a real life Dragon). There is a survival theme running through the story. To begin with is is how Sym survives on an uninhabited island and later it’s about the lizard.

In chapter 2 Syms rescues Darwin from the sea, but is then swept away and is washed up on a strange uninhabited island. On the island he is befriended by a lizard, who he names Farthing after his copper coloured eyes. She helps him survive on the island and escape the dragon.

I found some of part 2 harder to read. I think at that point I was still getting my head round there only being one human character and lots of the weird landscape of the Galapagos which is so well portrayed in Lindsays writing. If using in the classroom some real pictures of the Galapagos might help. I mention this as some readers may benefit from being read the beginning of part 2 as they will love the next bit.

I loved how Syms fiddle features in his survival story, and serves as a tool to introduce us to some of his back history and to help him survive the present. And the clever placing of the objects in the cave, which helped Syms and the eggs to escape the island was really clever storytelling, which could be used to help children write their own stories.

After Syms is rescued, Darwin’s ship makes its voyage back to London.  In London we get to find out more about Farthing, the lizard and the dragons eggs. We also see Syms taking on a role in looking out for Farthing.  There is also a great fictional connection to Queen Victoria.

The story covers a number of years in Darwins’s life, not just his expedition to Galapagos. With insights into the collating and publishing of his work on evolution in London, and the need for him to stay away from additional controversy as his ideas on the Origin of the Species were controversial enough at the time.  Finally a the end Syms re-visits the island with one of his daughters.

Cleverly interweaving real facts and information with action packed adventure, and fantasy and cleverly twisted facts to create believable fiction this is not to be missed.  A story that will keep you in the moment and which you will want to re-visit. Highly recommend for 9/10+ to 99 years.

Thank you to the publishers Chicken House books for a free advance copy.

Darwins’s Dragons is published on 7th January 2021. Available to pre-order from me an independent bookseller at Readers that Care. In a special 2 book bundle, choose 2nd book from a selection of over 20 titles.