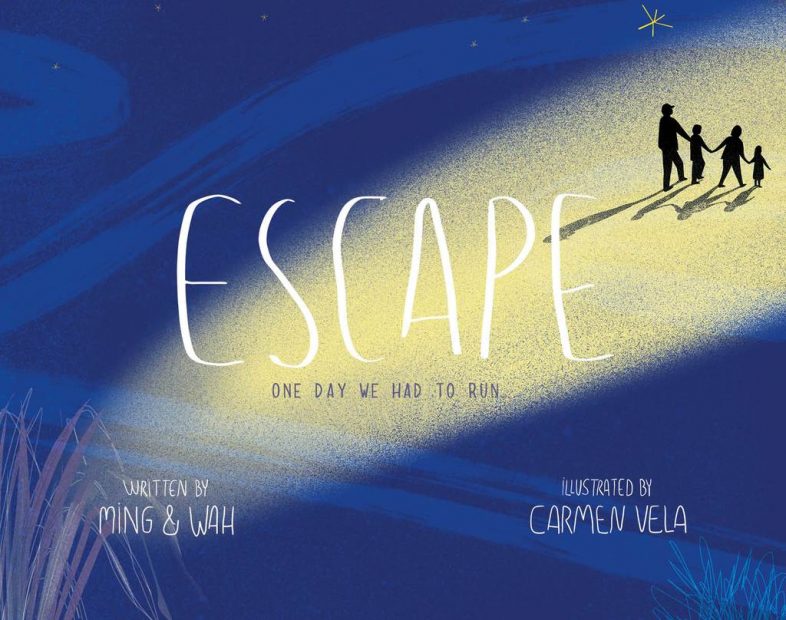 Mini-book Review: Escape: One Day we had to run by Ming and Wah, and illustrated by Carmen Vela

I was delighted to invited by Lantana publishing to take part in the Escape: One day we had to run blog tour.  This picture book explores why people around the world are forced to flee their homes. It takes a unique angle on the topic. Choosing 12 words and a personal story to go with each word. Each is presented on a double page spread with bright and bold illustrations, which combine with powerful effect.

I love the range of stories included. There are examples from different time periods and places in the world. It includes: Syria, Climate Refugees fleeing Pacific Islands, a long-distance runner escaping Eritrea, Bonnie Prince Charlie in Scotland and someone escaping the Cultural Revolution in China.

This book will help broaden the readers understanding of why people have to flee their homes, and help them to see the individual stories behind the headlines. It provides plenty to discuss, and is likely to prompt further research. Highly recommend for 9 to 80 years.

The publisher asked us to choose a person to spotlight for the Blog Tour. I ended up choosing two people. Read on to find out why.

I wanted to feature Ioane’s story for several reasons. Firstly, it’s the first time I have come across environmental and climate reasons for a person fleeing their country in a children’s book.  In Ioane’s case rising sea levels were destroying the Pacific Island he lived on.

Secondly, when I looked into his story, I realised it had taken him a 13-year struggle to get official Refugee status. Because until recently environmental and climate reasons were not recognised as qualifying criteria which forced people to leave their homes.

In January 2020 Ioane Teitota and his family took their case to the United Nations Human Refugee Committee. It became a landmark case in the rights of people fleeing their homes for environmental or climate change reasons. Shortly, afterwards Jacinda Arden established a special status for a small number of ‘Climate Refugees’ from the Pacific Islands and Ioane and his family were granted the right to stay in New Zealand. This is another example of the forward thinking and compassionate leadership of New Zealand’s president Jacinda Arden.

I chose Ivo’s story because it has always interested me the extra-ordinary lengths a few individuals went to escape Soviet Russia and/or the Eastern bloc during the Cold War. Ivo Zdarsky in 1984 did something very brave he built his own light aircraft and flew it across the border to Austria.

Another reason for choosing this example was to highlight the economic benefits refugees can bring to the new county they settle in. Ivo was helped by a refugee group to emigrate to the Unite States. Where he eventually built a successful aircraft propeller business called Ivoprop. I decided to do a bit more research about Ivo and was fascinated to find out more about what he went on to do next. A story which will interest many young people.

I also hope that by spotlighting this story readers will be encouraged to look up some of the different ways people escaped the Soviet Bloc or from East to West Germany (which is also featured in the book).

Escape: Once Day we had to Run is available to purchase in all good bookshops from 6th May in UK and from 4th May in USA and Canada.

purchase from me at Readers that Care for £11.49, free postage to Mainland UK. Click here.

You at also purchase direct from Lantana publishing, click here. One comment on “Escape: One day we had to run – Spotlight blog tour”